Total losses of $2.6 billion, substantial out-of-pocket costs to victims’ families, and links to bullying and known perpetrators all characteristics of this damaging problem
SAN FRANCISCO, April 24, 2018 – More than one million children were victims of identity fraud in 2017, resulting in total losses of $2.6 billion and over $540 million in out-of-pocket costs to families, according to the 2018 Child Identity Fraud Study released today by Javelin Strategy & Research.
The report, sponsored by Identity Guard, finds data breaches are especially damaging for minors. Among those who were notified their information was breached, 39 percent became victims of fraud, compared with 19 percent of notified adults. The limited financial histories of minors give fraudsters a long-term opportunity to slowly develop networks of accounts, mimicking legitimate holdings. 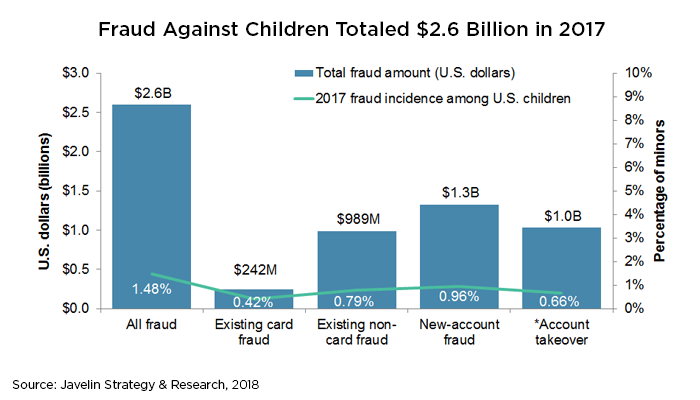 “Child identity fraud is a serious problem and is frequently overlooked as the public focuses on high-profile breaches involving the personally identifiable information of adults,” said Al Pascual, Senior Vice President, Research and Head of Fraud & Security at Javelin Strategy & Research. “Child identity fraud has unique characteristics that make it particularly hard to prevent, though there are steps that parents and guardians can take to help keep children safe.”
More than half (60 percent) of child identity fraud victims personally know the perpetrator. In contrast, only 7 percent of adult fraud victims know their victimizer. Many of these perpetrators have legitimate access to the personal information of victims, and children of any age are not safe. Two-thirds of child identity fraud victims are under the age of eight.
The study also finds a strong connection between bullying and fraud. Minors who are bullied online are more than nine times more likely to be victims of fraud than minors who were not bullied (incident rates of 6.67 percent vs. 0.72 percent). In-person bullying is associated with higher fraud amounts.
“In many cases, fraud and bullying are not perpetrated by the same individual but arise from the same underlying vulnerabilities,” said Pascual. “Children who are unprepared to protect themselves from online risks are likely to encounter individuals who wish to target them emotionally or financially. Bullied children also may be more vulnerable to fraud as they are taken advantage of when they seek friendship online.”
Because children are less likely to have their own debit or credit cards, existing-card fraud (ECF) is comparatively rare. This stands in marked contrast to identity fraud among adults, where ECF dominates the fraud landscape. While adults are most frequently targeted for the value of their account – the funds available for immediate theft from a checking account or credit card – minors are targeted for the value of their identity.
The complexity of fraud against minors tends to lead to dramatically more expensive fraud schemes than those faced by adults. On average, fraudsters were able to steal $2,303 when they misused the identity of a minor, more than twice the mean fraud amount for adult fraud victims. Worse, while adult fraud victims are typically able to avoid liability for fraud, the families of child identity fraud victims paid an average of $541 out of pocket.
Most children have limited ability to act on their own behalf in securing their identity against fraud, guardians are often their first line of defense. The following recommendations can help reduce the risk, create detection timeline, and limit the impact of child identity fraud.
Methodology
The 2018 Child Identity Fraud Study was independently produced by Javelin Strategy & Research. Javelin Strategy & Research maintains complete independence in its data collection, findings, and analysis.
Consumer data is based on information collected from an online survey of 5,000 individuals, fielded August-September of 2017, who either currently live in a household with a dependent minor or who have lived in a household with a dependent minor in the past six years. The margin of error for questions answered by all respondents is +/- 1.39 percentage points. The margin of error is higher for questions answered by smaller segments of respondents.
Additional Consumer Resources
https://www.identityguard.com/news-insights/
To report incidents of suspected fraud or identity theft, visit the FTC online at:
http://www.ftc.gov/faq/consumer-protection/report-identity-theft