Number of Identity Fraud Victims Rose to 13.1 Million, but Fraud Decreased to $18 Billion

Fraudsters use Stolen Information with eBay, PayPal, Amazon and other Internet Accounts

SAN FRANCISCO, February 5, 2014 – The 2014 Identity Fraud Study released today by Javelin Strategy & Research (@JavelinStrategy), reports an increase of more than 500,000 fraud victims to 13.1 million people in 2013, the second highest number since the study began. Account takeover fraud hit a new record in incidence for the second year in a row and accounted for 28 percent of all identity fraud. Additionally, fraudsters increasingly turned to eBay, PayPal and Amazon with the stolen information to make purchases. In 2013, data breaches became more damaging, with one in three people who received a data breach notification letter becoming an identity fraud victim. Encouragingly, the amount criminals stole decreased by $3 billion to $18 billion, reflecting more aggressive actions from financial institutions, identity theft protection providers and consumers. 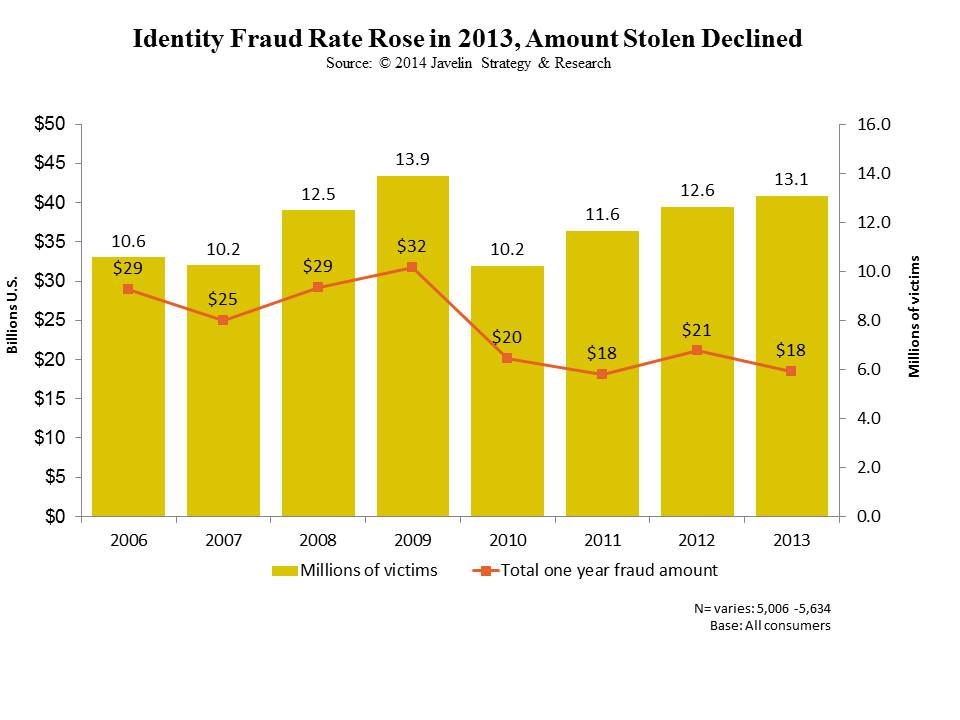 Now in its eleventh consecutive year, the comprehensive analysis of identity fraud trends is independently produced by Javelin Strategy & Research, and made possible by Intersections Inc., a company dedicated to consumer fraud prevention and education. It is the nation’s longest-running study of identity fraud, with 53,800 respondents surveyed over the past 11 years.

Identity fraud is defined as the unauthorized use of another person’s personal information to achieve illicit financial gain. Identity fraud can range from simply using a stolen payment card account, to making a fraudulent purchase, to taking control of existing accounts or opening new accounts, including mobile phone or utility services. In October 2013, Javelin Strategy & Research conducted an address-based survey of 5,634 U.S. consumers to identify important findings about the impact of fraud, uncover areas of progress and identify areas in which consumers must exercise continued vigilance.

“There were significant strides forward in 2013 in the fight against identity fraud. Even though the incidence of fraud increased, the amount stolen significantly decreased,” said Al Pascual, Senior Analyst of Security, Risk & Fraud, of Javelin Strategy & Research. “Consumers and businesses cannot let up the effort. Our study found that criminals are adapting their approach to focus on account takeover and they are effective at using the information they secure from data breaches. Any complacency will provide fraudsters renewed opportunities.”

Six Safety Tips to Protect Consumers
Javelin Strategy & Research recommends that consumers work in partnership with institutions to minimize their risk and impact of identity fraud by following a three-step approach: Prevention, Detection and Resolution™.

4.  Be proactive and enlist others – There are many different levels of identity theft protection and consumers should work in partnership with institutions on identity theft prevention. By setting up alerts that can be sent via e-mail and to a mobile device and monitoring accounts online at bank and credit card websites, consumers can take a more proactive role in detecting identity fraud and stopping misuse. Additionally, there is a wide array of services available to consumers who want extra protection and peace of mind including payment transaction alerts, credit monitoring, credit report fraud alerts, credit freezes and database scanning.

5. Take any data breach notification seriously – If you receive a data breach notification, take it very seriously as you are at a much higher risk. If you receive an offer from your financial institution or retailer for a free monitoring service after a breach, you should take advantage of the offer, closely monitor your accounts and put a fraud alert on your credit report.

6. Don’t wait. Report problems immediately – If you suspect or uncover fraud, contact your bank, credit union, wireless provider or protection services provider to take advantage of resolution services, loss protections and methods to secure your accounts. A fast response can enhance the likelihood that losses are reduced, and law enforcement can pursue fraudsters so they experience consequences for their actions.

All trademarks are the property of their respective owners.