For First Time Ever More Social Security Numbers Stolen than Credit Card Numbers
The EMV Effect Shifts Fraud Online: 81 percent More Likely Online Than At Point of Sale
SAN FRANCISCO, February 6, 2018 – The 2018 Identity Fraud Study released today by Javelin Strategy & Research, revealed that the number of identity fraud victims increased by eight percent (rising to 16.7 million U.S. consumers) in the last year, a record high since Javelin Strategy & Research began tracking identity fraud in 2003. The study found that despite industry efforts to prevent identity fraud, fraudsters successfully adapted to net 1.3 million more victims in 2017, with the amount stolen rising to $16.8 billion. With the adoption of EMV (embedded chip) cards and terminals, the types of identity fraud continued to shift online and away from physical stores. The complexity of fraud is also on the rise as criminals are opening more new accounts as a means of compromising accounts consumers already have. 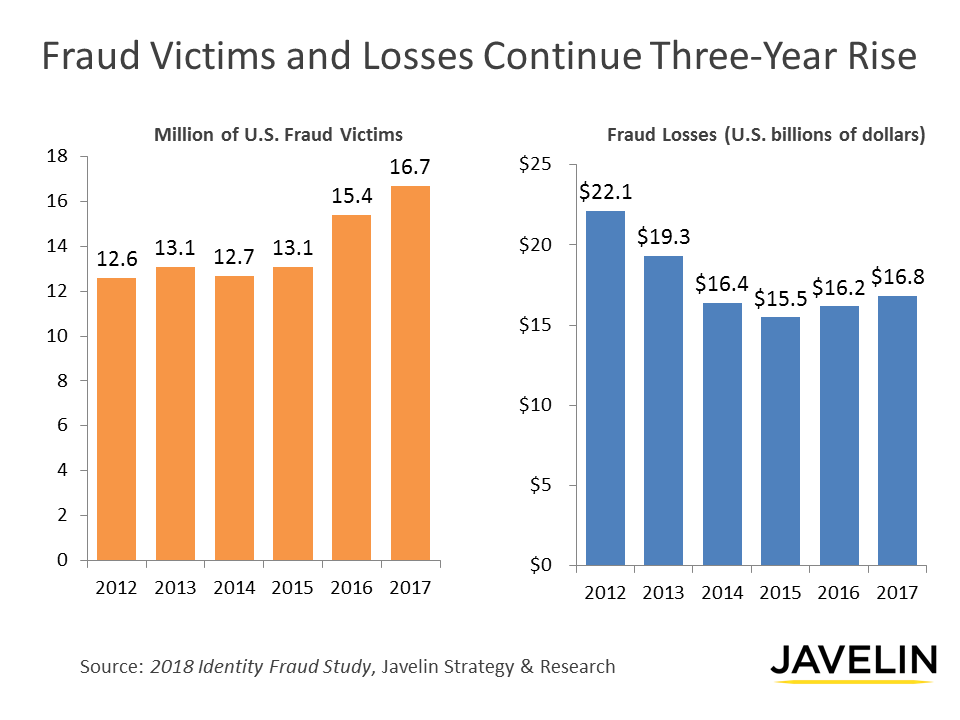 This last year saw a notable change in how fraud is being committed. While credit card accounts remained the most prevalent targets for new account fraud, there was significant growth in the opening of new intermediary accounts, such as email payments (e.g. PayPal) and other internet accounts (e.g. e-commerce merchants such as Amazon) by fraudsters. Although not as easily monetized alone, these account types are invaluable in helping fraudsters transfer funds from the existing accounts of their victims.
The study also found three significant changes in data breaches in 2017. Nearly a third (30 percent) of US consumers were notified of a breach in the past year, up from 12 percent in 2016. For the first time ever, Social Security numbers (35 percent) were compromised more than credit card numbers (30 percent) in breaches. Finally, data breaches are causing consumers to lose trust in institutions. These trends combined to cause consumers to shift the perceived responsibility for preventing fraud from themselves to other entities, such as their financial institution or the companies storing their data.
“2017 was a runaway year for fraudsters, and with the amount of valid information they have on consumers, their attacks are just getting more complex,” said Al Pascual, senior vice president, research director and head of fraud & security, Javelin Strategy & Research. “Fraudsters are growing more sophisticated in response to industry’s efforts to implement better security. Fortunately, there are a variety of digital tools that consumers can leverage to stay better informed on the status of their identities and accounts, and to ultimately stay better protected.”
The annual 2018 Identity Fraud Study is a comprehensive analysis of identity fraud trends, independently produced by Javelin Strategy & Research and made possible by Identity Guard, a provider of identity risk management and privacy protection services for consumers and businesses. The study is in its fifteenth consecutive year, and is the nation’s longest-running study of identity fraud, with 74,000 respondents surveyed since 2003.
The 2018 Identity Fraud Study found four significant trends:
New this year, the 2018 Identity Fraud Study examined the impact the relentless news about data breaches is having on consumers.  With rising fraud incidence and extensive media coverage of the Equifax breach, the proportion of consumers who are concerned about fraud rose from 51 percent in 2016 to 69 percent in 2017. Breaches rank at the top of identity-related threats facing consumers according to those surveyed. Javelin found 63 percent of consumers report that they are ‘very’ or ‘extremely’ concerned about the threat of breaches, but many are unsure that they have the ability to effectively protect themselves. Cynicism about breach notifications rose dramatically, with 64 percent of breach victims indicating they believe that breach notifications do little to help protect them and are principally about providing legal cover for the breached company. All of this combined, caused consumers to shift the perceived responsibility for preventing fraud from themselves to other entities, such as their FI or the companies storing their data.
Methodology
Identity fraud is defined as the unauthorized use of another person’s personal information to achieve illicit financial gain. Identity fraud can range from simply using a stolen payment card account, to making a fraudulent purchase, to taking control of existing accounts or opening new accounts.
In 2017, Javelin conducted a nationally representative online survey of 5,000 U.S. consumers to assess the impact of fraud, uncover where fraudsters are making progress, explore consumers’ actions and behaviors and how it relates to fraud risk levels, and identify segments of consumers most affected by fraud.
Five Safety Tips to Protect Consumers
Javelin believes that consumers who exercise good online security habits can minimize their risk and impact of identity fraud. The following are five recommendations for consumers to follow: